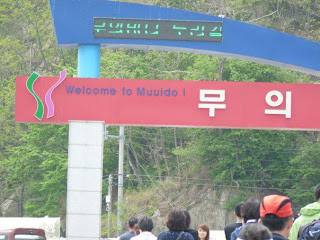 On the weekend of May 12 & 13, we went to Muui-do (Muui island) for a relaxing beach camping getaway with some old and new friends!  Jen Pace, our resident Korean survival guide with a wealth of knowledge (who has sadly now left the peninsula), proposed this event via Facebook a few weeks and prior and since we were free that weekend we decided to tag along!  During the week leading up to it, we gathered all the necessities we would need from the local markets/shops in our area (lots and lots of food: wieners, hot dogs, chips, veggies, etc... even pizza)!

On Saturday morning, equipped with our backpacks and large reusable E-mart bag filled with goodies, we caught the airport shuttle bound for Incheon on which we met Kyle and Becky, who were somewhat newbies to Korea and were also heading to Muui-do.  We instantly hit it off!  Just like Jen and I, Kyle and Becky both possess Education and Social Studies degrees and the similarities between us do not end there.  It was therefore natural to ask them to share a beach hut with us!


Once at Incheon International airport, we hopped onto another bus, this one leading us to the wharf where we would take the shortest ferry imaginable to Muui island.  Once there, we had to take one more bus ride that would take us to Hanagae Beach, where we would be spending the next 24 hours.  Right after arriving, we rented our hut, unloaded our stuff and quickly went on our first beer run to the only convenience store at the beach.  As the afternoon passed, we sat around, played catch, talked, drank, relaxed.  It was really nice!  The weather was perfect and the company second to none.  The beach itself is set in a bay at the bottom of small mountains (more like high hills) and surrounded by rocky banks.  It made for beautiful vistas!  It was also quite busy with Koreans and Foreigners alike, who came to enjoy a weekend by the water to escape the urban jungle of their daily lives.  As the day progressed, even more people arrived and joined our group which grew to about 16 or 17 people by sundown. 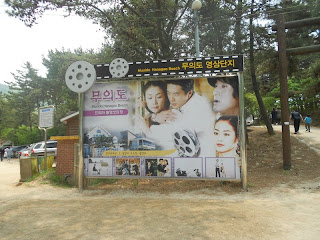 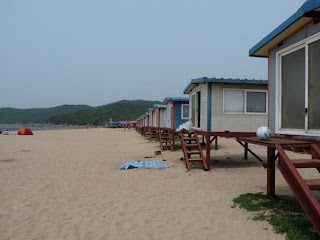 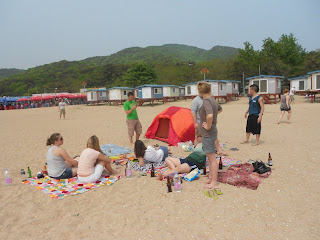 Just before the sun set, we walked out for over 20 minutes on the muddy earth left behind by the receding tide.  Shortly after, we lit up the grills and shared a feast for the ages as almost everyone had brought copious amounts of food.  Of course, beer and soju filled up most cups around the dinner "table" as camaraderie grew with every gulp.  Later, some of us gathered firewood to prepare for a night of fun and chatter by the campfire.  In fact, in order to concentrate our efforts and make for a better fire we joined another group of waygooks who already had their blaze going.  The musicians took out their instruments, the talkers their tongues and the drinkers their drinks as dusk turned to night and all were bundled around the flames to catch a bit of its warmth.  Around midnight was the time when the skinny dippers took off their clothes and braved the cold water for a dip.  As in true Canadian fashion and to live up to my friends' expectations, I obviously counted myself as part of that group of young adventurous water nudists.  I must admit that the water was much colder than I had anticipated... but did warm up once you were in it for a while.
Finally, as sleep was conquering over the group, I retired to my friends' hut (Jen, Becky and Kyle had already gone to sleep) to join them in a game of Apples to Apples before finally admitting defeat and crashing on my slice of heaven, which was simply a corner of the floor in our hut.  I slept like a baby!  The net morning, we had breakfast, saw off many of the group and then took our own leave shortly before noon.  Our next destination was Jamsil Stadium, where we would meet up with Ian, Chris, Bri, Katie, Barry and Dana for a good old game of Korean Baseball.  Of course, I was a little hung over and both Jen and I were very tired, so we decided to stop by a jjimjilbang on our way to the stadium since we have a few hours to spare.  On top of being relaxing, it would also give us an opportunity to wash our dirty and smelly bodies! 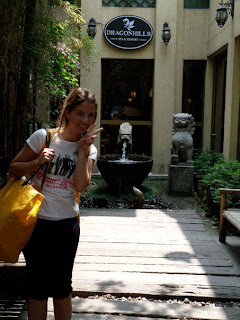 Jjimjilbangs can literally be found on almost street corner.  But since quality and respectability can sometimes be questionable, and because this would be Jen's first time, we decided to splurge and go to Dragon Hill Spa, which is renowned in the Seoul jjimjilbang community.  This 7-floor spa has everything from the obvious saunas and baths to an arcade and several restaurants.  After paying the fee (12,000won), we split up to our own gender areas where I got down to my birthday suit and washed, relaxed in the many salt baths and saunas.  When I came down to the common area, Jen was in her jjimjilbang wear sitting in a massage chair.  I immediately joined her and furthered my relaxed state.  My hangover was also completely cured just in time to get back into our regular clothes and meet up with our friends to enjoy the game! 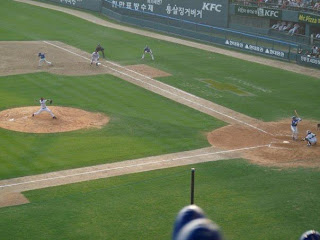 When we arrived at Jamsil Station, we met up with the group, bought our thundersticks, (which are those inflatable sticks used to cheer for your favourite team) and found our seats nestled in the nosebleed section (but for 11,000won, you couldn't go wrong!!! The view was fantastic)  The day's match featured the LG Twins up against the Samsung Tigers and since we were in the cheering section for the latter, that would be the team we would cheer for!  While the game on the field was pretty uneventful until the 9th inning, the experience of being at the field in Korea was completely out of this world.  Every single player has his own chant which the crowd repeated en masse every time he stepped up to the plate.  During the intermissions or in between innings, cheerleaders would take the stage and rile up the crowd even more.  Sometimes, I found myself forgetting about the game itself as I was watching the spectacle going on around me.  One word comes to mind: CRAZY... but in a great, it's pure fun, kind of way!  Watching baseball has never been so much fun and I highly recommend catching a ball game if you ever find yourself in Korea.  It's a great experience in and of itself! 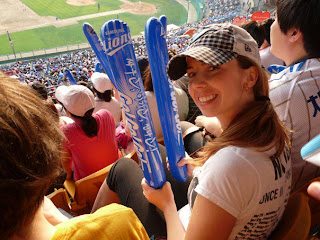 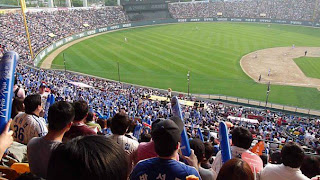 After the final pitch was thrown, Samsung's victory over its rival left us cheery and in a good mood despite the fact that our tiredness was catching up to us.  As we exited the field and realized how busy the subway would be, we decided to grab a Domino's pizza before heading home.  The ride home was long and quiet as we all fought hard to stay awake.  I could even hear my bed calling my name!  But as I sat and reflected on another successful weekend, I couldn't help but be very satisfied with all the experiences we shared this weekend.  I am looking forward to going back to Muui-do before I leave for some more well deserved beach relaxation a la Korean!

(Please note: Some of the pictures in this blog were taken from Jen Pace and Becky Simpson!)

Jason and Jen in Korea
Annyeong Haseyo!!! We're a newlywed couple (July 23, 2011) who decided to go on an adventure! We're both teachers with 3 years experience in Canada attempting to learn about Korean culture while teaching the young ones ESL! We both love traveling and have been to a few places including Canada(obviously), USA, Mexico, Dominican Republic, France, Tunisia, Morocco, Germany, South Korea. We are definitely looking at this opportunity as a starting point for visiting more of South East Asia. Call it the Gateway to the Orient! Feel free to drop us a line at any time! We'd love to hear from you. Better yet, come visit! Seriously! Enjoy our blog!